Greener pastures, along with trees and a river in which to paddle, brought Susie Jechow to Victoria College.

Jechow is VC’s Paramedic Coordinator in the Emergency Medical Services Program, coming to Victoria from Del Rio in January.

She was working as a Paramedic Coordinator in a nonaccredited program in West Texas and learned that Victoria College had an opening in the EMS Program.

“I knew of (former VC EMS Program Coordinator) Carl Voskamp, and of his good reputation,” she said. “I knew he had built an excellent program, so there wasn’t a lot of work to do continuing it.” 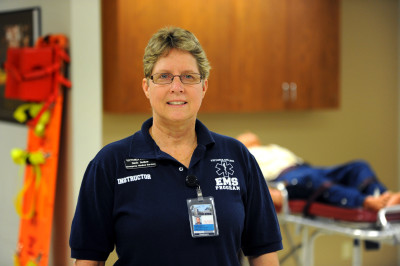 A self-described military brat, Jechow was born in Massachusetts and went to three different schools before first grade. She has worked in the EMS field since she was 19.

“I worked with a variety of public providers from very rural in Real County to very urban in Hannover, Germany,” she said. “I like the smaller town mentality where everyone knows each other.”

She got into the EMS field after being furloughed from her national park ranger job at Amistad National Recreation Area in Val Verde County. While trying to get the necessary certifications to reclaim her job, she was taking a required Emergency Medical Technician class.

After completing the class, she awaited word on the park ranger job. The Park Service didn’t call her, but the hospital where she took the class did, so she started working there.

“It’s very addictive,” Jechow said of the EMS field. “There’s nothing like it – to jump up at a moment’s notice and someone hands you a child who is not breathing. Whatever the outcome, you know that you did everything you could and were ready for that call in every way possible. It’s a good feeling to know you were part of that incident and somehow made the situation better.”

Jechow likes Victoria but feels there is a higher purpose for her coming here.

“Everything has been laid out for me in my personal and professional life,” she explained. “Sometimes God drops you on this earth someplace, and you think, ‘why am I here?’ But I know this is where I am supposed to be.”

“I first came here in 2006 prior to Hurricane Rita where we did an evacuation mission from DeTar hospital,” she continued. “I have also paddled the Guadalupe River between Cuero and Victoria. I liked the trees and green grass, which were a big change from the Chihuahuan desert of West Texas.”